Tourist Information Centre in Oświęcim
Jesteś tutaj: You are here: Du bist hier: MSiT EN >> For the tourists >> Oświęcim ... and where next? >> Monuments of Chrzanów >> 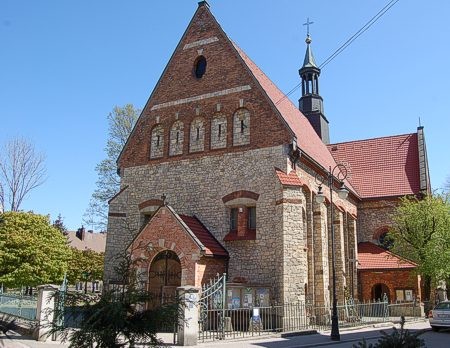 St. Nicholas’s Church – built at the turn of the 13th and 14th centuries. The church acquired its final shape, which survived up to 1912, in 15th century and later, due to extensions. All that remains of that gothic church is the present day presbytery. A brick belfry was erected next to the church, most likely in the same period. A full-scale conversion of the church in Chrzanów, which took place in 1912-1914, gave the church its present-day appearance. The modern interior design of the church is composed mainly of the 19th century altars and paintings, the Stations of the Cross, the St. Stanisław 17th century altar, made of black marble and exceptionally beautiful stained glass (with regards to both composition and colour combination), dating back to the last years of the Austrian rule (1914). Among other interesting exhibits inside the church we may mention the 15th century monstrance, early-Baroque chalice dating back to the 17th century, a Baroque baptismal font made of black marble from Dębnik (before 1748) and a big chandelier with the image of a white eagle from the interwar period. Other interesting exhibits from inside the church are : a mosaic picture, showing the Madonna holding the Infant, which is a gift from the Pope Leon XIII for Henryk Loewenfeld (1888), who – in turn – handed the papal present to St. Nicholas’s Church in Chrzanów. There are crypts under the church, where the ashes of former Chrzanów owners, officials from the mansion in Chrzanów and certain outstanding townsman are buried. A standalone brick belfry was erected next to the church, most likely in the same period. It is mentioned in the documents dating back to the 16th century. On the belfry’s wall, in 2003, a commemorative plaque was inserted, which is devoted to citizens of Chrzanów who fought for an independent Poland during the years 1918-1920 and 1939-1989.
On ul. Mickiewicza, next to St. Nicholas’s Church, there is a rectory, erected in the period when Chrzanów belonged to the Free City of Cracow (1844). The building is an example of architecture with neo-Renaissance and neo-classical elements. The original interior design of the first brick rectory was slightly changed during the extension in 1934. 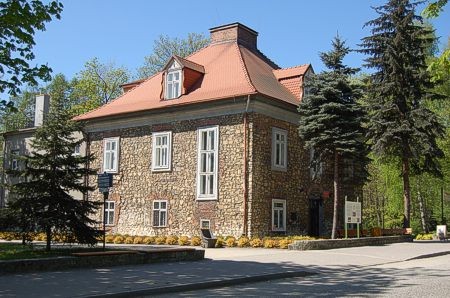 Mansion Granary of the 16th century iscurrently the Museum of Chrzanów Land. Originally , the building constituted a part of the mansion complex, called the castle, which was the place of residence of the Ligęza family, the owners of the town owners. Due to the bad condition of the currently non-existing mansion, the last owners of Chrzanów converted the mansion granary into their residence at the end of the 19th century. It is located on ul. A. Mickiewicza, leading to the roundabout, with an exit towards Oświęcim and Katowice and Cracow, on the edge of the town park, where you can still find many interesting trees and bushes from the old, manor times. Its historical part was constructed with the use of local stones.
The building has still got some Renaissance characteristics , such as a vault arch or its architectonic block. It was reconstructed by the last owners of the town – the Loewenfelds, who battle near Batorze in 1863. In the 1960s, the granary was converted into a museum. The building was entered into the Register of Historical Monuments in 1969 by regional Art Restorer. A one-storey extension was built on its southern side in the 1970s. 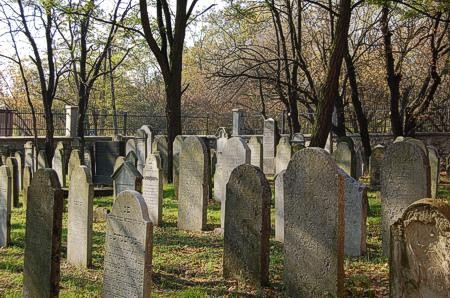 The origins of the Jewish cemetery located at Podwale in Chrzanów date back to the mid-19th century. Its area had been extended several times before WWII, through purchases of lands, but during the war the occupying authority liquidated the oldest part of the cemetery, with the next restrictions being made in the second half of the 20th century. Today the necropolis covers an area of 1,71 ha andabout 3000 tombstones (called “macewa”) can be seen there. The oldest tombstone was placed on the grave of Lea, daughter of Joseph Jozłe. Later tombstones commemorate burials of merchants, craftsmen, local notables, their wives and children. In the northern ohel, closer to the gate, Szlomo Bochner, son of Moses, a follower of Elimelech from Leżajsk (which is written on his epitaph), who was the rabbi for 40 years, was buried. Male representatives of the Halbersztam dynasty are buried in the southern ohel. David, son of Chaim, who died in 1894, his three sons: Joseph Zew, who died in 1902, Moses who died in 1915 and Naftali who died in 1927, as well as Moses’ sons: Baruch, who died in 1916 and Joseph Elimelech, who died in 1906.Three of them (David, Józef Elimelech and Naftali) performed functions “in the crown of abbinate”.
WWII and the “Shoah” (Holocaust) period exerted their traces in few, but meaningful tombstones. Macewa – a tombstone memorial in the place of burial of 37 inhabitants of Chrzanów, shot in Trzebinia, on 8th, 10th, 11th September 1939 also mentions the final extermination of Jews from Chrzanów in 1943.
Apart from history, the Jewish Cemetery also constitutes the traces of a many-century long Jewish culture, in its spectacular dimension. Numerous tombstones, decorated with symbols, among them some specifically rich ones, date back to the beginning of the 19th century. Inscriptions are almost exclusively written in Hebrew, however on several dozen or so tombstones, you can also find additional inscriptions in the following languages: Yiddish, German and Polish.
The Cemetery is closed during weekdays. Nevertheless, you may ask for a key in the house next to the cemetery, at ul. Borowcowa 3. You can hire a tourist guide, who will show you around, upon a prior arrangement. Information on when you can visit may be acquired in the local Museum, ul. Mickiewicza 13, tel. 032 753 87 11, e-mail: muzeum@muzeum.chrzanow.pl 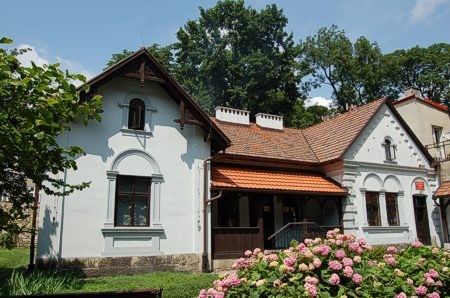 Located on Henryk Avenue, in a small garden. It was designed and constructed by the local builder – Franciszek Urbańczyk. Its historical and aesthetic values and location in a convenient, central place of the town were the reasons why it was purchased with the use of municipal finds in 1981 directly from the heirs of the last owner, Tadeusz Urbańczyk and then extensively  renovated and converted into a museum building, with the consent of Regional  Art Restorer in Katowice. The historic object was opened in autumn 1985, when a great anniversary exhibition was organised to show the entire worksof the Museum in Chrzanów, to commemorate its 25th anniversary. At present, it serves as a Museum Branch of Temporary Exhibitions in Chrzanów.